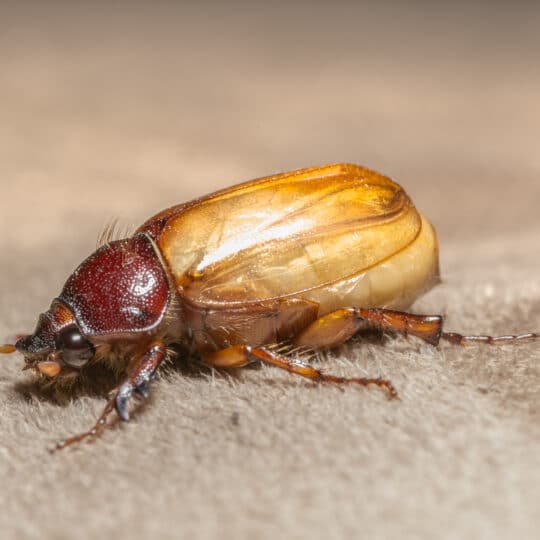 As their name suggests, the cigarette beetle is found in storage areas that contain dried tobacco. It is considered a stored-product pest, as it can cause significant damage and economic loss in tobacco warehouses. While these beetles can be found anywhere, they are most often found near dried tobacco leaves in the form of leaves, cigars, cigarettes, and chewing tobacco. The tobacco is then contaminated by the beetles themselves, larvae, pupae, cocoons, fecal matter, and insect parts—not items that your customers would agree to have in their products. Today, we’re going to look at your options for addressing the cigarette beetle with a focus on using diatomaceous earth for natural beetle control in tobacco warehouses.

Diatomaceous earth is the naturally occurring fossilized remains of diatoms—single-celled aquatic algae. It is a near-pure sedimentary deposit consisting almost entirely of silica. It is an approved and registered product for use against indoor and outdoor insects. The sharp edges of diatomaceous earth cut into insects’ bodies, causing them to die of dehydration. It is most useful in dry situations but can still be used in wet areas to make it more challenging for pests to survive.

The Kannenberg Ltda. and Univeristy of Santa Cruz do Sul Experiement

Kannenberg Ltda. and the University of Santa Cruz do Sul studied the effectiveness of diatomaceous earth on the population of Lasioderma serricorne (cigarette beetle) in tobacco warehouses in the region of Santa Cruz do Sul, RS, Brazil. The field work was carried out at Kannenberg Ltda. and in farms of associated tobacco growers in southern Brazil. From 2001 to 2005, all laboratory and field treatments with diatomaceous earth were observed showing that diatomaceous earth possibility to control the population of L.s., provoking a significant reduction (50-83%) of the number of individuals. The studies determined that diatomaceous earth, when combined with other conventional techniques, serves as an alternative for the control of this tobacco pest. The highest effectiveness is observed in dry application provoking a decrease (50-91%) of the population of L.s. in tobacco warehouses at Kannenberg and at growing sites. The cigarette beetles were monitored by pheromone traps in warehouse and laboratory settings.

Many indoor pests—including roaches, silverfish, spiders, and even fleas—are impacted by diatomaceous earth. For example, DE  can be placed in crevices where cockroaches have been spotted. A few days after the diatomaceous earth has been found by the cockroaches, they will desperately and unsuccessfully search for water and ultimately die a couple of weeks later.

While less effective when wet, diatomaceous earth can be used in the garden to make it more difficult for Japanese beetles and cutworms to thrive. When it is dispersed in dry weather beneath plants, it will also kill slugs.

There are various ways to use natural diatomaceous earth around the farm. Start by adding it to chickens’ dust bath mixture helping to prevent problems with lice. And use it to help control fleas on dogs and reduce parasites in horses, pigs, and other farm animals. Natural diatomaceous is an EPA and FDA approved natural insecticide. Adding diatomaceous earth to animal feed serves as an anti-caking agent and as a natural preservative. Its porous structure enables it to absorb moisture that would otherwise cause feed to mold or rot, helping the feed last longer than it would otherwise.

Our customer service representatives located at our plants are standing by, and our technical experts are anticipating your call. Call us today at 866-728-3303 for your free sample and to see for yourself what makes Dicalite Management Group a customer-first industrial minerals company.

Use our product finder to discover which of our minerals is right for your application.